I have been trying to get this post done for ages.  Like ages.  It has been months since we spoke to Fever Tree and started working together (they came us some free stock).

I also think I have made this blog (in some form) before too, I just don’t know where I saved it so let’s start again.

Right from the outset, when we call it Gin Club we usually mean “Glasgow Gin with some form of mixer in it Club”.  We rarely offer up the Gins without something to compliment it.  We do give people the chance to taste Gin neat but generally when we are running the nights we want people to enjoy the Gin the same way they would at home.

Lots of people give you the “nope” face when you offer them a straight taste of Gin, as in the past it’s not the most enjoyable thing to taste neat, which again stems from the fact they have only accidently drank Gordon’s straight, as students or at the end of the night when the mixer and ice has run out and it’s the only option.

We at Gin Club can assure you a good Gin can be drank neat, but we usually always have something in it.  With the exception of the EG night with the dry martinis using Cannonball, but that ended differently so we won’t be doing that in a hurry.

Right so let’s talk about Gin and Tonic club.

When people say “I don’t like Gin” we always say “nope you don’t like Gordon’s Gin and Schweppes Tonic.  Generally out of a tiny wee glass, a thin slice of lemon and one cub of ice.  That’s enough to put everyone off.

But there is something that will change your mind even with the dreaded Voldemort (I love how Voldemort is in the MS Word dictionary) of Gins Gordon’s.

Fever Tree has saved Gin for a lot of people.  We use it in pretty much all our drinks.  I should halt for a minute and say there are many other artisan tonics out there too, but instead of picking up a Schweppes pick up a few bottles of Fever Tree first, it really does change the whole Gin and Tonic game.

Those of you who come to Gin Club will have no doubt read and been preached to by Stuart and I about Fever Tree, but for those who haven’t read our Gin tasting guide check it out word for word below (yes I’m lazy, it’s my work lunch break):

Fever-Tree Indian Tonic Water launched in the UK in early 2005, the brand name chosen as a Fever Tree is the name for the cinchona tree, the bark which gives us Quinine.  One of the main uses of Quinine is in the treatment of Malaria, one of Malarias main symptoms is Fever, hence the name the fever tree.  Using Rwanda Congo Cinchona Bark and blended with spring water along with eight botanicals, such as: marigold and a bitter orange from Tanzania.

Fever trees have a range of products which they also make from Low Calorie tonic to their own Ginger Ale.

Right then let’s go through some mixers and Gins and their merits.

For which Gins: All of them

Notes: The standard amazingness which is Fever tree a must for all Gin’s and Tonic.  With maybe one exception of Gin (although I disagree but the distillers swear on it, more later).

Others: This also comes in Low Calorie, and a Lemon Tonic.

For which Gins:  Anything Salty or Olivey, Good in Gin Mare and EG Seaside

Gins: Anything with a spice that ginger can help with.  Ophir.

Others: Ginger Beer and light of both.  We used the Ginger beer in Firkin Gin last month. 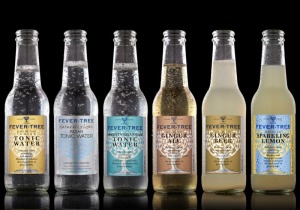 Gins: Experiment with Fever Tree first but according to Tony at Strathearn Distillery he says Schweppes is the perfect tonic of the Heather Rose.

Others: Load but I can’t be arsed.

Gins:  This artisan Tonic has an almost minty taste and works well with Daffy’s Gin.

Others:  Summerhouse do a host of artisan Lemonades.

Gins: I haven’t experimented with one taste group but this is a perfect product which compliments all Gins, Stuart loves it and he usually goes for the savoury Gins.

Notes: So this sound stupid but I generally find that Tesco, Morrison’s, Asda’s tonic own Tonic waters perform better across the Gin board to Schweppes.  Experiment.  I’m a fan of Waitrose own to be honest.

Notes: Bottle Green do a range of products, their standard tonic is lovely   across all Gins.

Others: They do things in pink, pomegranate.

Gins:  For the floral Gins

Notes:  Not my tonic of choice, I love the Fentimans brand and adore the Curiosity Cola but it’s too sweet and brings out floral notes in Gins which are already too flowery.  They actually did a bottle of Gin and Tonic Mix with Bloom Gin. 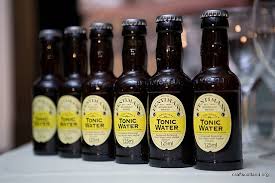