So the first Gin Club of 2015 is over, before I prattle on I would like to thank NB, St George, Martin Millers and Brecon Gin for being part of Gin Club January.  All these amazing brands went down a storm, my only regret is even though the car was ditched, #thecarsgettingditched, which led to #lettheginbegin, was that in no way did I drink enough of these fine brands.  Rothney (the help) and Ritchie (the photo man) did though.  Caldo and I as per were left too dry for our liking.

Caldo and I weren’t sure how the evening would go as we were minus our mother hen Kate, who had decided to bugger off on a ski holiday, even though she can’t ski and is always moaning about being too busy .  So we drafted in the services of our beer / wine making hermit of a friend Craig Rothney, tt was a pleasure to allow this man to escape his Perthshire cave for the evening and come and serve booze instead of standing by around with his usual side kick Colin (i’m average height) Clayes.  Those of you at the first Gin Club may remember that our #Gindout  hashtag comes from Mr Clayes as he cannot handle his booze (nor social interaction tbh).  Anyway Rothney saved us on Friday so thanks to him.

Another surprise blinder for the evening was that the Hidden Lane laid on a special Gin Club treats menu, which might I say was rather special.  Even though I was too busy to purchase anything, the pile of dishes at the end of the night was a clear sign of a successful gin related menu.   I did help myself to some off cuts of sponge.  Yummm.

Massive thank you to DJ Malky B who was sober…  No wine for him, just soul music, making our already couple-esk night feel like a Tinder speed dating evening with Gin to ease the inhibitions (thankfully nothing clatty happened).

There was no order to the gins this evening as me (Squirrel / Graeme) forgot to bring half of what he was meant to (I’m blaming Kate for not reminding me).  The booklets were absent for the first 20 mins and the Gin Me cards were in no colour coded order.  Some lovely guest asked “Are the Gin Me cards colour coded to the gins flavours”!…  Blank expression from me then a laugh/ As we have a tangerine colour and sea blue colour.

Our first gin to arrive and most people’s first gin of the night was NB (this is down to bottle placement on the bar nothing else).  We served NB with a slice of orange served with Fever Tree.  I love NB, it really is a classy well-made spirit.  You can check out our blog dedicated to NB or google it, but if you haven’t had some go and grab a bottle from the Good Spirit Co and enjoy it.  If you’re not wanting to be really adventurous (I am in no way saying NB is simple btw, its anything but) but wanting something expertly made and tastes incredible get yourself some NB.

Next to NB was a little bottle of a gin we never thought we would get, but hey if you don’t ask you don’t get.  St. George Terroir all the way from California (and not Yosemite park where I had it in my head it was from, apparently you get bears in lots of American states).  St. George isn’t a normal gin it’s much more specific and leading towards the herbaceous.  In our blog post when which we posted to announce the gins I describe the taste in much more detail but just to remind you, it tastes like an alcoholic alpine woodland, there is that hint of the smell your living room gets on the first day you get a Christmas tree.  We served it with Fever Tree and Rosemary, we originally put rosemary and lemon in there but it tasted too much like a standard G&T.

Martin Millers was something we have also wanted at Gin Club for a while and thankfully this time round Mr Miller appeared.  I have always been drawn towards this brand, not just because of the art deco bottle or the Icelandic connection but with the self-indulgence which goes into crafting it.  Two distillates and a 3000 round mile trip to add the water, truly a huge carbon footprint but what a magical result.  For January’s Gin Club we served it with Strawberry (sadly not Blairgowrie ground ones, it is January after all and not even a poly tunnel can help us) and black pepper.  Ohhh what a smooth drink, great combination from Stuart Caldow if ever I say so.  Those of you we stuck around to the bitter end will have got to try Caldo’s garnish experiments with Chilli’s and Coriander.  I like the difference in the taste with this but preferred the sweet strawberry.  We even changed the tonic at this point.  Martin Millers is a gin that can change a lot just on the mixer and the garnish so if you have a bottle experiment.

Last on our gin list was Caldo’s find, a left field option but still very much in the London Dry (Welsh Dry) world.  Brecon Gin is a very elegant lady of a product.  Classic gin flavours and made expertly.  It comes from the famous Brecon Whiskey Distillery and if you go on their website you can find loads about the Brecon national park, their incredible water and mainly their whiskey.  Not so much about the Gin though.  Brecon gin is a big traditional juniper laced gin with coriander and revealing hints of spicy cinnamon.  We served as a classic G&T with lime which soften the heavy juniper and complimented the cinnamon and herbs.

Once again Kate, Caldo, Rothney (I suppose) and myself would like to thank everyone there who made it another sell out gin club.  Next one is 27th Feb which is also a sell out then after that March which has just been announced 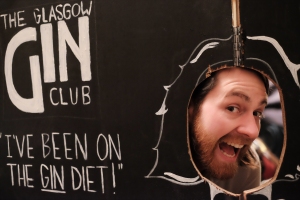 Also thanks to Ritchie, his sheer manliness and camera skills, the ladies of the Hidden Lane for their  food, the heat from the oven, the cake smell and the cakes.  Finally to Carly Morrison who keeps it all legal and always helping us out, you are a massive legend misses we wouldn’t have a GC without you.